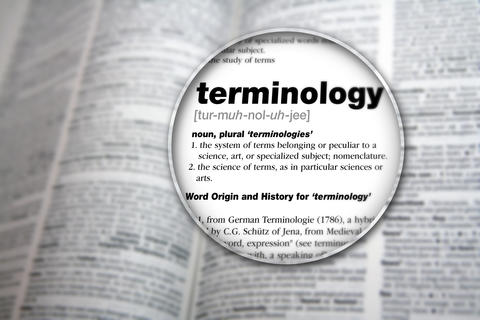 The Terminology used in industries relating to the weighing, batching, mixing, and automation can often be confusing and vary from company to company or industry to industry. This section of Sterling Systems & Controls website is designed to provide clear and understandable definitions of various terminology used both in industry and within our website.

The terminology will be arranged alphabetically but may be out of order for a time while it is being developed.  We thank you in advance for your patience and hope this is beneficial to all visitors to our website.

Auger Feeder: An Auger Feeder, a.k.a. Screw Feeder, is a type of dry material feeder commonly used in minor and micro ingredient batching systems to feed material from each ingredient supply bin to a weigh scale or scale hopper. The screw feeder could adjust its feed rate based on the screw or auger size, number and shape of individual flights on the screw or auger, and the speed of the drive for the feeder.

Automation: Automation can be defined in a few different ways. But for our purposes here Automation is the application of technology in a custom engineered manner to monitor and control a process of production, such as the production and delivery of various goods and services in a wide range of industries. Automation will perform tasks or processes that were previously performed manually by operators (human beings).  Sometimes Automation is referred to as Process Control, which it is, but Automation can be the application of technology  to automate things other than processes. Industries where automation is routinely employed include agriculture, food manufacturing, chemical production, refining, and many other industries.

Automatic: This terminology section will define the term Automatic in regards to a Batching System. A batching system has two functions which can be done as either manual or automatic. In a Manual manner an operator performs the function. In Automatic the system automation performs the task in some manner. In batching systems the function of feeding each ingredient into the batch container/transport and then delivering each completed batch to the next step in the process

Bulk Bag: A bulk bag is also referred to technical as an FIBC, or Flexible Intermediate Bulk Container.  These bags are containers to hold dry materials, powders and granular materials.  They are made of flexible fabric, such as polyethylene or polypropylene. They expand to fit the dry material. They have an opening in the top and a discharge or outlet in the bottom of the bag. A wide variety of flexible bulk bags containers exist, differences in shape, inlet, discharge etc.  Filling and Emptying FIBC’s are accomplished with specialized process equipment custom engineered and manufactured to fit the specific application requirement. These machines are often equipped with scales and weighing systems.  Bulk Bag Filling/Packaging systems and Bulk Bag Discharge/Unloading Systems.

Drag Conveyor: No, this is NOT a conveyor dressed in drag.  It is a conveyor   named for its method of moving granular and powder material by dragging it from point A to point B. They can be used to move material in elevation as well as in linear motion. Typically consisting of a drive chain and paddles or blades that capture and “drag” material along. One reason for using drag conveyors is they are more flexible in terms of the type of material they can move, wider range of bulk densities, particle size etc.
Typically the sizing of a drag conveyor depends upon: 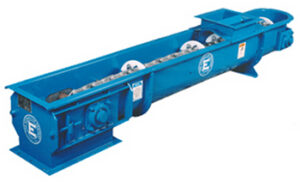 Dust Collector: Processing of powder materials can create airborne dust. This can be problematic in many situations and hazardous. From toxic to explosive dusts, this problem can cause property damage, injury and loss of life. Therefore, when airborne dust can be created in a process it usually requires being contained and collected.  This is common in material weighing and batching applications. A dust collector is used to collect and provide temporary storage of dust from a process point.

Dust collection from an automatic or semi-automatic ingredient batching system can be required at two points in the batching system. First is at the point where the powder material is fed into the batch container. The second is during supply of each ingredient material into its respective supply bin.

Grinder: The term Grinder in this industrial perspective is a generic reference to a piece of process equipment that reduces the particle size of a bulk solid material. There are several different types of “Grinders”, each defined by some aspect of its method of operation, such as a Hammermill, an Air Classifier, a Ball Mill, Roller Mills, Pin Mills, Jet Mills and Colloid Mills.

Micro: This term is generally used in describing the general weighment size for an automatic batching system. In a automatic batching system the ingredients, based on the chosen formula to be made, are fed from the ingredient supply bin the the appropriate scale hopper for weighing an accurate amount according to the formula being run.  A “Micro” weighment (refer to definition of “Weighment” within this Terminology page) is generally anything less than 50lbs (22.7Kg).  Often micro weighments are as low as several grams and the scale hoppers can be relatively small. The term “micro” in regards to ingredient batching systems is often generically used in the Feed industry regardless of weighment size.

Minor: This term is generally used in describing the general weighment size for an automatic batching system. In a automatic batching system the ingredients, based on the chosen formula to be made, are fed from the ingredient supply bin the the appropriate scale hopper for weighing an accurate amount according to the formula being run.  A “Minor” weighment (refer to definition of “Weighment” within this Terminology page) is generally runs from 50lbs (22.7Kg) up to around 150lbs (68.2Kg). Often micro weighments are as low as several grams and the scale hoppers can be relatively small. The term “minor” in regards to ingredient batching systems is often generically used in the Food and Baking industry regardless of weighment size.

Semi-Automatic: A semi-automatic batching system differs from both the automatic and manual systems. It is a combination of the two.  The semi-automatic batching system will automatically provide step-by-step instructions to an operator for creating a batch. The system automatically controls the process of proceeding from one step to the next by weighing and comparing to the required amount and ensuring that the correct material has been used/added.  The operator will feed each ingredient from it respective bin/box/container to the batch container for weighing on a scale controlled by the system. Once a batch is completed and verified by the system an operator manually moves or transports the batch container to the next step, typically to the mixer.

Valve: A Valve is a mechanical device that regulates the flow of a dry or liquid material. The flow can typically be ranged from 0-100% by a valve. There are several different types of valves, depending on the application. Some are used exclusively for dry materials like powder or granular solids. Others, specifically designed for use with liquids. Common valves used for regulating the flow of dry materials like powders are the Rotary Airlock Valve and the Slide Gate, the Iris Valve and the Butterfly Valve (designs available for liquids as well).

Weighment:  No Terminology section would be complete without this specialized term, Weighment. A weighment is the weight measurement of a given item, ingredient, batch etc. In order to determine the scale requirements for ingredients it is often necessary to know what the minimum and maximum weighment is for each ingredient. This means identfying what the minimum and maximum weight value is of a specific ingredient.  A weighment can be thought of as a single weight measurement value.