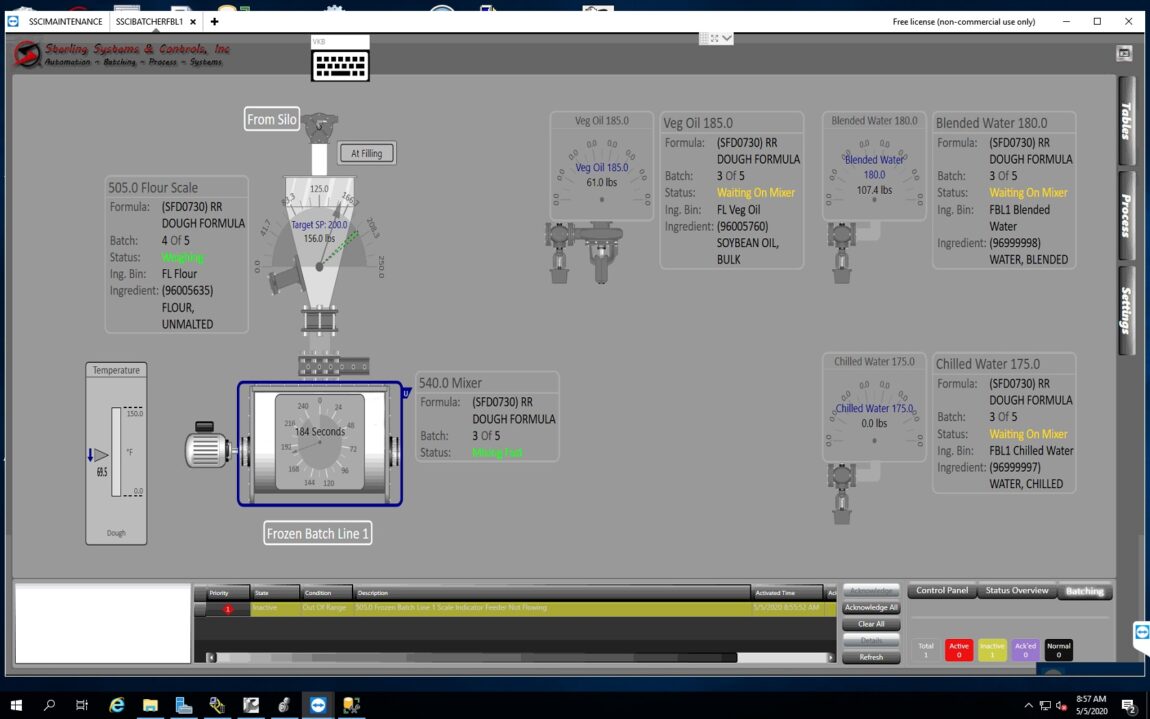 The first line has only one batching station, but it is expandable to add a second batching station if required. The second line has two batching stations which share flour, oil, and water as their bulk ingredients. Multiple batching stations are provided for the total system to deliver operator convenience and flexibility. Typically when each batching station makes a call for flour or oil, the PLC request will be handled as first come first serve (FIFO). Flour is conveyed pneumatically and oil is pumped to either mixer as available. Water, however, can be tempered or chilled. Water going to each mixer can be called at any time without waiting for the other to finish because each mixer has a dedicated flow meter for each type of water that is monitored to meter how much water goes into the mixer.

The Batching screen shows a flour scale mixer, and liquid meters. When the equipment or vessel is on or active, the graphic will go from dark gray to bright white. If an alarm exists on any equipment, a red square surrounds the device with a pulsating red triangle. Each batching vessel has a batch block, as described earlier, but includes ingredient and bin information. The text that shows status are color coded indicating any abnormal condition as red, normal operation as green, waiting condition as orange, or idle condition as black. Each ingredient bin above each scale shows calculated level as a narrow bar graph and they are color coded as well. The color coding is determined by the level set points and bin inventory in the bin assignment table . The bar graph will be blue if above the warning set point, yellow if between the warning and low set point, and red if below the low set point. Each scale has a scale gauge that shows the target set point and net amount underneath. A green band on the gauge is the graphical representation of the target weight set point. The needle will move closer to the green band as the scale hopper fills. The modern touchscreen graphic display conforms to ISO 11064, ISA101, ANSI, and ASM standards and practices.

Hand adds were also a part of the overall batching system. Hand Adds and Premix’s are prompted and can be acknowledged from the batching stations. Hand adds and Premix’s shown on the main screen will look like that shown to the left.

One unique aspect of this specific batching system application, compared to others Sterling Systems has completed, is that commissioning of both of the two lines were done remotely due to COVID19 restrictions imposed by the customer and Sterling Systems to protect all employees. Sterling Systems, two electricians, the customer, other contractors, and customer IT people worked together on various occasions from installation questions, IO checkout involvement, equipment configurations and setup, to training.