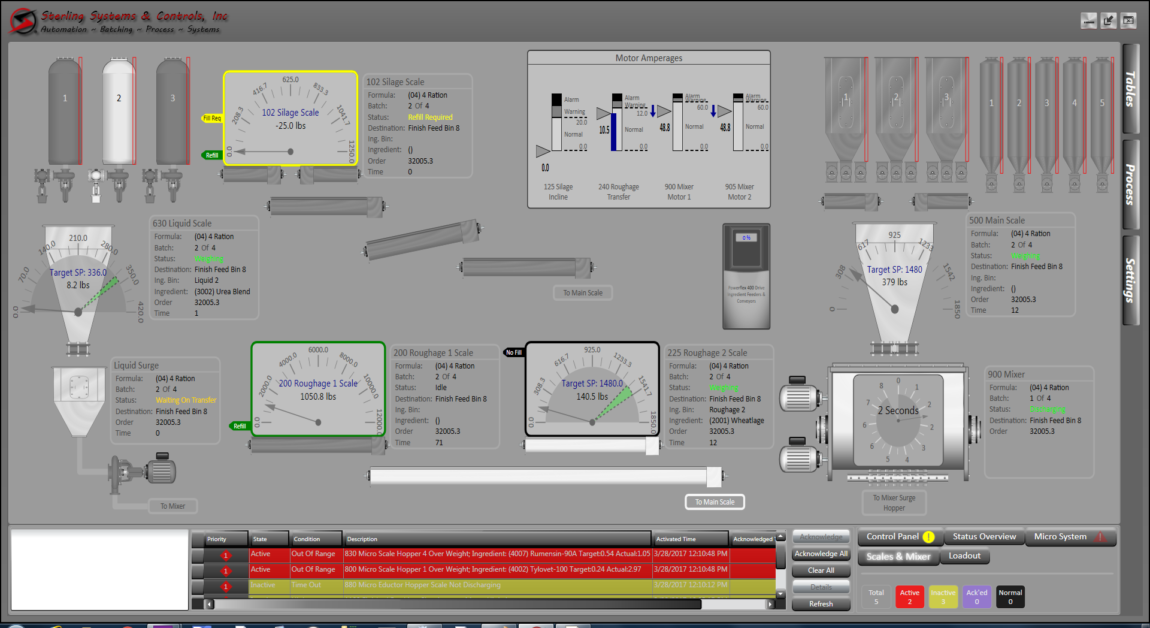 It isn’t unusual, in fact it is commonplace, for Sterling Systems & Controls, Inc.’ equipment and controls to be upgraded and enhanced over years of operation.  Mechanical equipment gets replaced or added, the process changes and/or expands, and PC and operating system technology continues to evolve, usually for the better making things more cost effective and efficient.  Automation is no exception.  An Automation Upgrade is often performed after several years or when an event may necessitate it. In addition, it is not unusual for companies to begin with a small modular system, like batching with four (4) ingredients let’s say, and then expand over time adding more ingredients and formulas.

Sterling Systems & Controls is experienced and very accomplished at assisting customers through the evolution of their process, equipment and systems.  The evolution of automation especially is something that tends to get upgraded over time. Automation technology changes fairly quickly so that the state-of-the-art today is not the state-of-the-art in another year or two. Those companies involved with designing and creating automation systems and capabilities are constantly keeping in touch with changes in hardware and software standards and tools. Let’s take a look at an example of an automation upgrade over time.

A decade or so ago Sterling Systems was approached and asked to come in and replace an existing batching system (by other manufacturer) by a large cattle feeder operation.  The reason Sterling Systems & Controls was brought in was because of the absence of support from the previous system supplier, as well as some performance issues. The application was a cattle feed operation with blending and mixing of both liquids and solids to feed a mixer and produce the final feed end product. Sterling Systems & Controls proposed a customized seven (7) scale Batching Control Software System with interface to the existing control panels, PLC hardware and the PLC network for the customers’ feed yard weighing and mixing equipment.  No wiring changes were anticipated, and the proposed new software system was based on what Sterling Systems & Controls had done at a different customer location for a similar application, the basics of the system design had been proven.

The replacement batching system software that Sterling Systems & Controls ended up supplying utilized a Desktop PC (supplied by the customer) running Sterling Systems & Controls new (at the time) Windows based Batching Software.  The PC was connected to the existing customer Control Panel(s) that house the Programmable Logic Controller (PLC) and the PLC provided Input/Output (I/O) interface to the field devices.

The existing manual Control Panel enclosed the seven (7) weight indicators and panel mounted switches for manual back-up capability. The batching system incorporated standard batching features such as the multi-tasking capability that allows the system to batch while editing or checking formulas, formula creation, ingredient tracking, ingredient inventory/usage and other main menu functions. According to the customer, one major benefit of the Sterling Systems & Controls batching system is that it produces batches faster than the previous suppliers’ batching system.

With the new PC came the upgrade from Sterling Systems & Controls legacy batching system software to the current state-of-the-art using Microsoft .NET. .NET is a framework that runs on the latest Microsoft OS’s and provides programming guidelines that can be used to develop a wide range of applications, in this case the Sterling Systems & Controls batching system software.

Also included in the automation upgrade for the new system was a host of upgrades including grinder monitoring, and a supervisory remote control application called WebCentral™ Supervisory Control. WebCentral™ is a software package that allows corporate users to access the database of a Sterling Systems & Controls, Inc. batching control system. This can be used to enter and manage all configurable items remotely using a PC’s web browser.