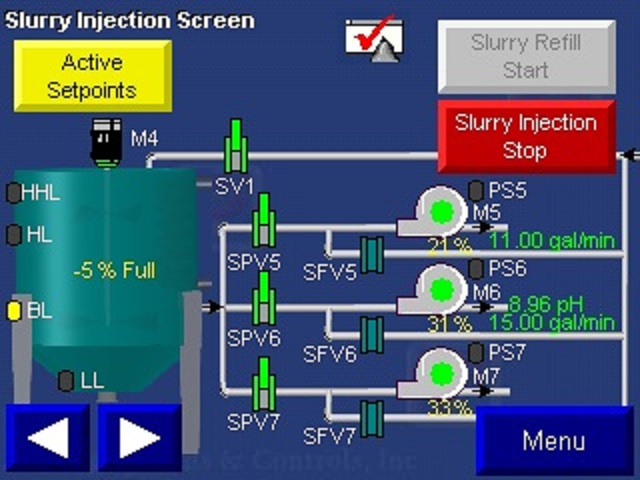 Soda ash, or sodium carbonate (NA2CO3) is a water soluable salt of carbonic acid.  It is often used in municipal water treatment to raise the pH of the water. “Historically sodium carbonate was extracted from the ashes of plants growing in sodium-rich soils, such as vegetation from the Middle East, kelp from Scotland and seaweed from Spain. Because the ashes of these sodium-rich plants were noticeably different from ashes of timber (used to create potash), they became known as soda ash” – source WikiPedia.  Soda ash control is an important aspect in the use of soda ash.

This soda ash control application is in a municipal water treatment facility.  In this application Sterling Systems & Controls worked with the construction contractor and end user (municipality) to provide a control system and automation for the soda ash processing and handling equipment.  The control system consists of a stainless steel NEMA4X PLC Control Panel that contains a Main Disconnect, E-Stop button, Alarm Horn and Beacon, Alarm Silence button, and a 6” PanelView Compact Color Touchscreen HMI.  A second control panel is also included, a stainless steel NEMA4X Silo Fill Control Panel which contains Manual/Off/Auto (MOA) switches, indicator lights, and Alarm Horn.  Indicator lights notify the operator of silo levels and the status of selected equipment.  An alarm horn notifies the operator of all urgent or abnormal conditions.  The horn can be silenced at any time via an alarm silence pushbutton as well as from the HMI.

MOA switches on the Silo Fill Control Panel provide manual-off-auto operation for selected equipment.  A switch must be placed in the automatic position for the PLC to control the corresponding equipment automatically.  When MOA switches are placed in automatic mode, the system is operated by setpoints and system parameters entered into the HMI and pressing the on-screen Start pushbuttons to enable automatic operation of the selected process.  When the system is enabled and in automatic mode, it will control the Slurry Refill, Silo Filling, and Slurry Injection processes as described below.

The soda ash control system is started as follows:

The equipment will be stopped in the following manner.

Automation of the following processes also exists in this system: