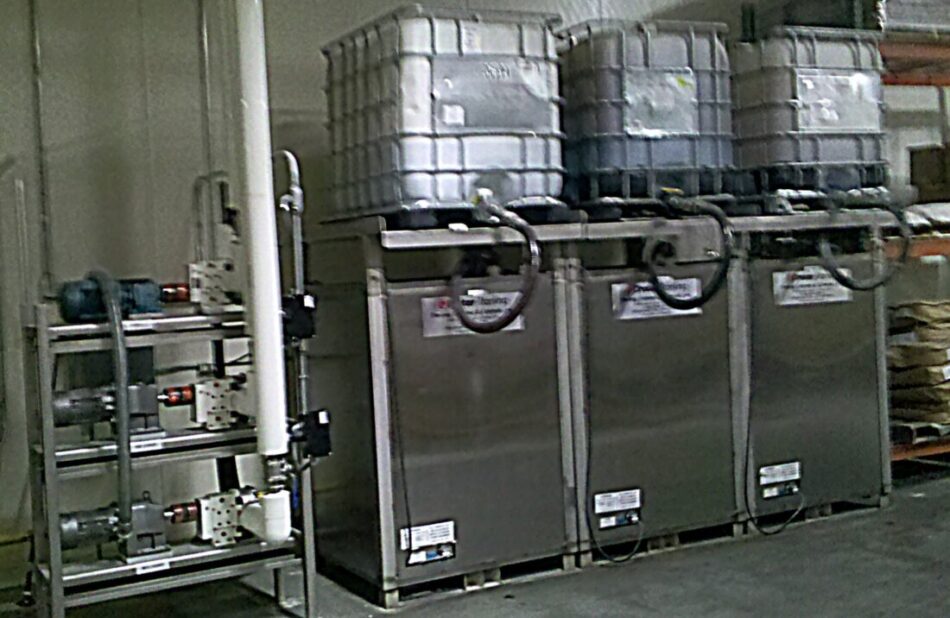 It isn’t unusual for Sterling Systems & Controls to be called in to fix problems with equipment systems of other brands.  One major snack food producer did just that.  It was a sizeable project as several dry ingredient systems and liquid additive systems needed retrofitting.  Sterling engineered new automation and process controls to replace the competitive panels and systems.  Sterling’s recommendations were accepted by the customer almost verbatim, a liquid dosing tote system.

ly tote on top that feeds the mother tote when required.  The pumping system is on a rack located next to the totes, and the Coriolis type Flowmeters, scale hopper and mixers are further downstream.

The three (3) liquid tote dosing system include the following liquids: Honey, Molasses and Refiners Syrup. The lower “mother tote” is a Poly Bottle with food grade “micro pore” super smooth inside finish. High efficiency insulation for high concentrations of temperature sensitive liquids, preset to 90ºF to 110ºF or adjusted as required. Other features and/or specifications include:

The process control and automation of the three (3) liquid dosing tote system is integrated into one of several new control panels supplied by Sterling Systems on this upgrade project.  While not shown here, this screen shot shows the main process graphic screen.

The liquid dosing tote systems can be controlled to specific metered amounts or the fluids can be weighed by scale hoppers and pumped to the mixers.