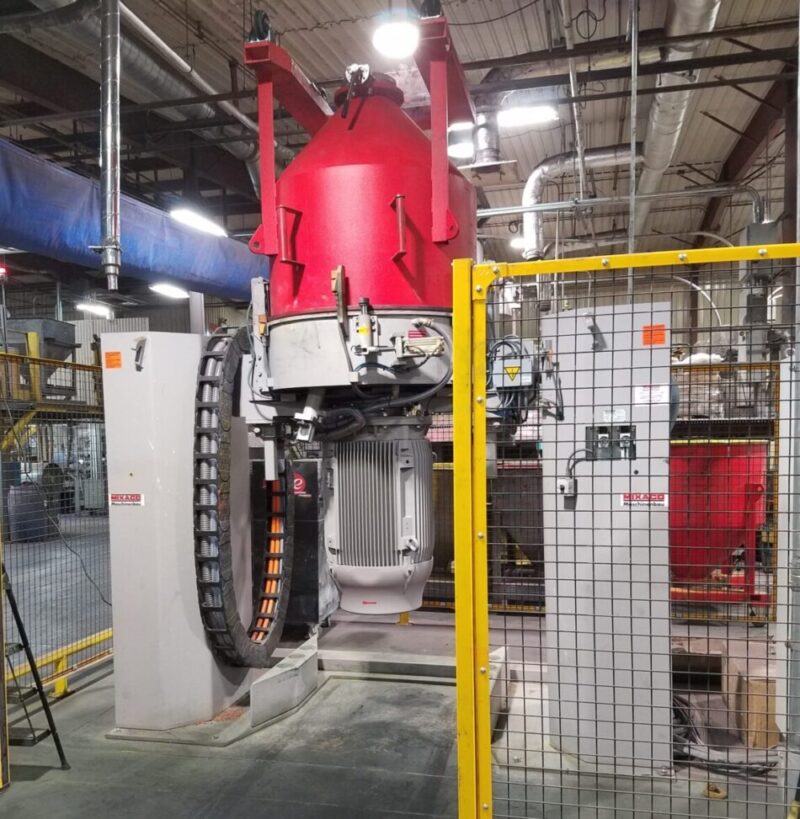 Sterling Systems & Controls, Inc. has provided the custom designed and manufactured automation for an ingredient batching system featuring batching in mixing containers. This includes three (3) transfer/mixing scale carts (each a different size capacity) with structural frame, two (2) single scale HMI control panels with Allen Bradley PanelView Plus operator interface terminals (one located at each end of system), two (2) VFD (variable frequency drive) electrical control panels (one located at each end of system), and one (1) common CompactLogix PLC system panel. The system utilizes eight (8) ingredient feeders and bins for batching ingredients via gain-in-weight. Sterling’s automation system controls the batching process by operating the two-stage feeders as required. The “mixing containers”, when filled with a completed batch, will be moved directly to the “container mixer” for mixing.

Two (2) mixing containers on their respective transfer/scale carts start their travel during the batching process from points at opposite ends of the system from each other. Once the first cart that begins its travel completes its collection of batched ingredients, including automatic and semi-automatic hand adds, the second cart is automatically controlled to then begin its travel to collect its batch of ingredients. When a cart completes its batching cycle it is then manually removed and brought to the mixer where it is connected and the mixing process begins.  Once mixing is complete the contents of the cart are emptied downstream in the overall process and the cart returned to the ingredient filling system for the next batch. This system provides an expandable solution for automatically batching formulas with multiple dry ingredients.  The system indexes the mixer containers to the proper locations, automatically controls the feeders, and weighs each ingredient into the mixing container in a gain-in-weight fashion.

While processing instructions to batch a specific formula, the automation controls will provide equipment instructions to automatically position the traveling mixing containers and to dispense ingredients. For example, assume that a batch of “Example Formula #1” will be run on Scale Cart #1 (recall from the above paragraph that two (2) scale carts [a mixing container is attached to the scale cart by the operator before beginning a batch] start their travel during a batching process). It is assumed that all data has been entered previously and that all equipment is in automatic mode and the system is idle and ready to process a batch command.

The video shown here illustrates the mixing container indexing and filling with ingredients.  The picture below shows an operator adding Hand Add materials and then removing the mixing container from the system to transport it to the mixer. The isometric illustration in the video shows the entire system with the Mixing Container scale carts, HMI panel and VFD electrical panel at each end of the batching system.